Are you well-versed in comment etiquette? (via WordPress.com News)

This is a Reblog.

Which comment would you rather receive? "Great post! Check out my blog at someblog.wordpress.com." or "Well said! I know exactly what you mean about X, and I'm glad that I'm not the only one who thinks so. I would even say that A, B, C! Your candor is greatly appreciated." The second one, of course. Why? For one thing, it follows the etiquette guidelines below. But even more importantly, it was written with the intent to forge a relationship, not … Read More

A resolution stating that the City of Pflugerville supports the creation of a Solar Technology Incubator will be considered at a special Pflugerville City Council meeting at the Justice Center at 6:45 PM on Thursday, February 17, 2011.

The incubator will be located at the Pflugerville Solar Farm according to the resolution.

But here is recently expressed skepticism about the existence of some benefits claimed for the kind of green technology exemplified by the Pflugerville Solar Farm:

The FCC will be taking a vote tomorrow. See

A 90 million dollar transportation and mobility bond proposition is coming up for a vote in Austin.

Still more about the bond proposition is presented in “Coalition recommends ‘no’ vote on Prop. 1” by Steve Alberts, KVUE.com, October 5, 2010.

Smart Growth is Not Green. Low Density Housing Better for Your Health and the Environment. (via Smart Growth USA)

This is a reblog.

(Under construction.)  Look at the photo above, and think about the neighborhood that you grew up in.  Large shade trees, a nice backyard for baseball, and a large vegetable garden with fruit trees.  Wild birds, raccoons, and perhaps even deer, hawks, and eagles.   Bicycle and pedestrian friendly streets, with low traffic and low air pollution; no worries about asthma attacks while cycling or jogging. Let's compare the places of our childhoods to … Read More

A survey has been posted online for obtaining input for the Imagine Austin Comprehensive Plan.

A response to the four proposed scenarios found in the survey has been written in a column entitled “Hold that elevator: I want to imagine future Austin, too” by Ed Wendler, Jr., Austin American-Statesman, September 30, 2010.

If Pflugerville will be considering subsidies to support more development, then perhaps the downsides of providing subsidies should be evaluated along with the benefits.

This video (O’Toole on WaterWalk) takes note of some downsides.

Item 8A on the agenda for the September 28, 2010, regular meeting of the Pflugerville City Council was

“Approving a resolution directing the publication of Notice of Intention to Issue City of Pflugerville , Texas, Combination Tax and Revenue Certificates of Obligation and Other Matters Related Thereto in a maximum principal amount not to exceed $4,250,000.”

There is a video of Item 8A available at the City of Pflugerville website.

Item 8A is covered in an article in The Pflugerville Pflag by James Rincon entitled “Bonding process may save city millions.”

There is a glossary of terms including “advance refunding” on pdf page 3 in a website posted by the City of Atlanta. 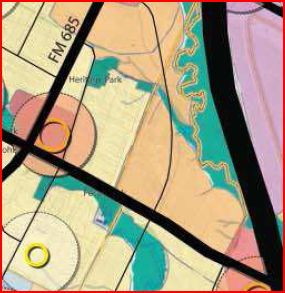 Directly to the left is a part of the Preferred Land Use Vision Plan map that had been appearing on page 39 (pdf page 23) in the Land-Use Character Section of the Final Draft Pflugerville 2030: Your Voice, Your Choice Comprehensive Plan released in June. Areas designated “Medium to High-density Residential” are shown in tan.

The assignment of this density of land use to the land just east of Bohls Crossing was protested by some residents of the Bohls neighborhood at a hearing at the the regular meeting of the City Council on July 27, 2010. This protest was also expressed in a petition submitted on July 12 that had signatures from 349 homes in the Bohls neighborhood.

Projected on the screen at the hearing was a map showing the land extending from the east edge of Bohls Crossing to the proposed extension of Pfennig Lane in yellow for “Lower to Medium-density Residential.” 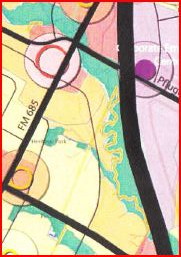 At left is a part of a map showing this same revision. The full map was obtained as a handout as the beginning of the City Council Bus Tour on August 21, 2010. It carried the page number 39.

The revision has apparently never appeared on page 39 of the Land-Use-Character Section that was accessible from the Pflugerville 2030 website. It should be mentioned that the Land-Use Character Section is not now (August 25) available online from a link from the Pflugerville 2030 website and has not been available from there recently.

The eleven tour focus areas listed on a handout distributed just before the August 21, 2010, City Council bus tour began were

Nine of the eleven focus areas are centers. Planning for centers was prominent in the Pflugerville 2030 process. Transit-oriented developments might be expected to represent more of the areas of higher density proposed by planners in cities with rail transit.

Eight of the focus areas include a mention and/or an example of medium to high-density residential in the handout.

At left is a part of a map that appears on page 125 of the Implementation Section  of the Final Draft Comprehensive Plan. Growth expected through 2015 is shown by areas in green. Note that one of these areas lies between the east edge of Bohls Crossing and the planned extension of Pfennig Lane.  The following excerpt is from page 123 (pdf page 1) of the Implementation Section:

But many have moved to Pflugerville expecting to enjoy a suburban lifesyle in neighborhoods of single-family homes with back yards rather than in an environment built up with additions of 30 units per acre. Was this considered during the preparation of the comprehensive plan?

Nineteen were present for the bus tour. The length of the tour given on one of the map handouts was 53.8 miles.

Information about areas of interest was given by Trey Fletcher, Managing Director of Operations for the City of Pflugerville, as the tour proceeded.  This was accompanied by discussion and commentary from the others present.

Posted in Uncategorized | Leave a comment
Our Pf Voice
Create a free website or blog at WordPress.com.